“I am hoping that we get more in this amazing series. This is a must-read series for me! I couldn’t set this story down.” ~Kat 5Stars LoveBytes Reviews

“The feelings in and about this book-whoa. Both men have had so much pain and fear, watching them begin to trust each other and have hope again was breathtaking.” ~Evette 4Stars Jessie G Books 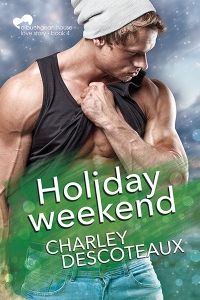 Available at your favorite ebook retailer!

“You feel like changing those plans?” Glenn pushed off from the doorjamb and stepped out into the alley. “How do you feel about zombies?”

“What?” I laughed, and finally the tension I’d been holding onto since that night at Kel’s place broke. “Zombies?”

Oh, yeah. Glenn dancing is something I’m up for. Literally, it would seem.

“Do you have a costume?” I took a few steps toward the door, and by the look on Glenn’s face, he’d noticed the way my body was reacting to the conversation.

Glenn snickered. “Not really. I figure they won’t care too much if some of the zombies are fresher than others.”

“Good.” Glenn walked right up and into my personal space. He looked up, and his heavy-lidded eyes said maybe he was feeling something too. “I know an all-ages dance party after. If it rains, we can still dance.”

Glenn held my gaze for another long moment, and the charge in the air between us had goose bumps rising on my arms. I wanted to touch Glenn (way more than just touch, although that would be a good start), but we were standing in the alley behind the restaurant. It would be even worse to only get a taste and then struggle through the rest of the day, so I stepped back. Just a half step, not enough so it would look like I didn’t want to be near Glenn.

“Then it’s a date.” Glenn winked and went inside.

I watched him go for a few steps and then followed.