This was definitely the right couple to wrap-up this series. ~Lila, Scattered Thoughts & Rogue Words 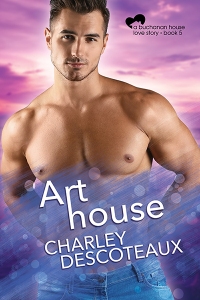 Available at your favorite ebook retailer!

Chase Holland spends his days painting Portland scenes to hang in local businesses, neglecting his own surrealist style. After twenty-five years as a full-time artist, he’s frustrated that his career has stalled, but churning out the equivalent of corporate art is better than getting a day job. Chase and Garrett have been together—off and on, but mostly on—for a decade. If asked, they would both say the source of their trouble is the seventeen-year age gap. The truth is less clear-cut. Life would be so much easier if Chase could make a living with his own art, or if Garrett held less conventional ideas about relationships.

Garrett Frisch has been watching their friends get married for the past two years, and it’s taking an emotional toll. When he proposes as a way to keep them together permanently, he thinks he’s being responsible, but Chase is ambivalent and hurt and can’t hide it. It doesn’t help that Garrett’s anxiety is out of control and he’s dealing with insecurities about his own art career. They will have to do their least favorite thing—talk about something more important than which food cart to visit—if they are to get the happy ending they both want.

Garrett felt a little guilty taking Jess’s key card but planned to be back before she had to get up for work. Hopefully, long before she woke up and noticed he was gone. He had his own key to her apartment, but it wouldn’t get him into the building. She had one of those fun-size chocolate bars in her pocket along with the key card, and he swiped that too, vowing to replace it with a full-size version.

He hopped onto the last MAX train heading south and crossed the river. If Chase was still driving that damned pedicab, which was so far beneath him it was obscene, hopefully he at least kept to the same routes. Garrett walked along the brewery tour, as far as he could remember, looking for a good space. The route wound through the Pearl to a half-dozen of the trendiest brewpubs, and as far as Garrett could tell nothing new had sprung up within the past few weeks. He was tempted to go nuts on a small square of plywood covering a broken window on one of the breweries, but kept looking. His principles had relaxed since he first started tagging, but not that far.

Tagging. While he searched for a good spot, he mused about his feelings for the term. He’d liked it a lot more when he was thirteen. It had sounded like he was a radical street artist and not just some random guy with a handful of Sharpies.

A city-owned trash and recycling bin stood on the corner near the second stop on the tour. Taking care not to cover the instructions, Garrett used black and purple to leave his mark on the blue bin. It didn’t take long, but by the time he pocketed the pens and stepped back to look at it, his body trembled. Nothing had changed except his perception, but he hadn’t felt so exposed and vulnerable when he’d done this before. It had been years since he’d drawn his signature tag—his screaming profile with dandelion fluff blowing away instead of hair—but it looked the same as it had the first time.

Garrett flipped the hood of his jacket up and walked away, surprised at what was going on in his mind. Even though he’d left the tag for Chase, he was thinking about his childhood. About the nights when he couldn’t stay in his mother’s tiny apartment one more second, couldn’t listen to the yelling or the fucking or whatever had been going on that particular night. The first time he’d left in the middle of the night he’d only been ten years old, but he remembered how he felt, walking in the dark through the streets of North Portland.

He’d gotten away, and for a few merciful hours it felt like he would never have to listen to any of the horrors that lived in that apartment again. Never have to hear anyone telling him to man up or criticizing the things he liked as too “girly,” never hide under his blankets and try to sleep through the sounds of violence in the next room.

He had gone right to school in the morning. That was the first time he’d ever been glad to be on the free breakfast and lunch program at school. Free food had made everything easier, even though he hadn’t brought his backpack and got in trouble for forgetting his homework. Nobody asked any questions. Nobody seemed to know he’d walked around the neighborhood and then slept in the bus stop shelter across the street and came to school wearing the same clothes for two days in a row, or if they guessed anything was wrong, they didn’t care.

Garrett—twenty-seven-year-old Garrett—had walked all the way back to the same bus shelter he’d slept in that night. He looked around at the North Portland neighborhood that seemed to have changed very little in seventeen years, and took out his Sharpies. He hunkered down and worked in silence until he heard a deep voice behind him.

“What are you doing?”

He froze for a moment and then pivoted on the balls of his feet to look up at the man attached to the voice. “Leaving pictures for the kids.”

After a moment of silence, the man—the cop—cleared his throat. “Let me see.”

Garrett stood and moved to the far end of the shelter. The cop hunkered down in his place and shone a flashlight on the plastic wall facing the elementary school building. Garrett realized he was probably in trouble, but all he could think about were the kids who would be walking past in the morning. How desperately he needed to think about even one of them seeing the kittens playing, and smiling.

“Wow. That is so cool.” The cop sounded half the age he had before, young and happy. And a moment before, Garrett had been bracing himself, a familiar vague sense of violence about to happen crackling in the air around him. The abrupt change shocked him, and his answering thank you died in his throat.

The cop stayed hunkered awkwardly in the corner of the bus shelter for a few seconds more and then stood. He shone his flashlight on the ground between their feet. “I have a job you’d be perfect for. If you’re interested. Can I get your card?”

“Um… I don’t have a card.” Garrett wanted to ask what kind of cop didn’t care about graffiti but thought better of it. Even though his relaxed standards bothered him—the bus shelter didn’t belong to the city—he at least had the presence of mind to school his speech.

“Do you have a kid in this school?” The cop tilted his head to indicate the elementary school down the block. He may have frowned a little, but not in a menacing way. More like he was trying to figure something out.

“No. I grew up in this neighborhood. Sometimes school is sanctuary. Sometimes….” Garrett clamped his mouth shut and willed himself to stop talking before he ruined the officer’s goodwill and ended up in a jail cell.

Garrett shook and introduced himself, even though his palm was slick with nervous sweat. The cop—Andy—spoke over him while he was saying his last name.

“Take my card. Call me. For now, I’d suggest you finish up and go. My shift ends in about thirty minutes.”

Andy moved his flashlight onto the kittens again and played it across the bottom of the shelter wall. Garrett thought he might have been smiling. Andy waved a little as he left the bus shelter, and Garrett was left wondering exactly what had just happened.

Regardless of what kind of job a Portland cop could have in mind for a guy he should have arrested, Garrett didn’t want to be caught by whoever replaced him after shift change. He added a tail on the last kitten—completing the heart shape he’d begun with the kitten standing on top of the ball of yarn—and headed back to Jess’s building.