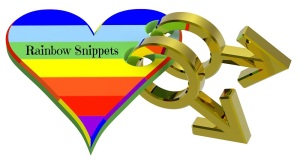 I hope you’re enjoying your weekend!

Now that Pride Weekend is out (and free, everywhere but Amazon, those meanies!) I’m turning my attention to next week’s release, Tiny House! Nathan’s story is one of my favorites I’ve ever written and i love him to death, but I didn’t make things easy on him—the poor guy has to deal with issues from his past and new ones that pop up and say hello.

In this snippet, Nathan has just met his brother Evan. The details are a little spoilery, so you’ll have to believe me when I say that meeting his brother is a surprise. One sentence over, but the first is only one word so it shouldn’t take any longer to read. 😉

Evan. A twenty—no, twenty-one-year-old version of himself. A little shorter, so about five ten or eleven, thick blond hair with a little wave and a haircut that must’ve cost at least as much as his own, lithe, twinkish figure, what he could see of it—oh, God, I did not check out my baby brother at Pride last weekend!—and full, insouciant mouth. But still, those triplet eyes.

Nathan couldn’t stifle a shudder as he thought about the triplets—all fraternal, but all with those creepy blue eyes that always seemed to want something he couldn’t give. Luckily, the shudder happened while Evan was putting his backpack down, so he might not have seen it. Nathan cleared his throat and remembered he wasn’t an asshole.

Don’t forget to head back to the Rainbow Snippets FB Group, for more 6-sentence bites of queer fiction!

If you’d like to read Chapter One of Tiny House before it’s released (on 4/29!), grab your free copy of “Pride Weekend”–it’s included in its entirety. Dreamspinner is having a sale through the 24th so if you’d like to get Tiny House at 25% off here’s the link!

Pride weekend is over, but for Nathan Lucas, the summer is just heating up. He appears to have it all. He’s tall and blond, ripped and handsome, and half owner of Buchanan House, a successful gay retreat on Oregon’s beautiful central coast. But his joie de vivre hides a fear of abandonment. When he was twelve his mother had triplets, and instead of the cherished only child, Nathan became a scapegoat for his exhausted parents, and he has never truly dealt with that pain.

Portland chef Paulie Nesbitt is head over heels in love with Nathan. They’ve been drinking buddies with benefits for years, while Paulie has not-so-secretly yearned for more. Paulie’s extra pounds and self-doubt have kept him from acting on his feelings. Their friends know they would make the perfect couple, but Nathan and Paulie will have to let go of past insecurities if they want a future together.

23 thoughts on “A surprise for Nathan on today’s #RainbowSnippet!”