I’m thrilled to welcome Melanie Hansen to my blog today–fellow Dreamspinner author and now officially one of my heroes! Because who can resist a gal with chutzpah? 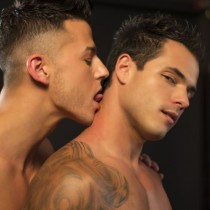 (Do yourself a favor and watch the whole video, so HOT! http://www.andrewchristian.com/index.php/kiss.html )

Once I tracked down who the sexy man with the smirk was, I searched out everything I could find about him, and learned that he’s an Andrew Christian exclusive model. I watched all of his Andrew Christian videos and drooled over all of his pics. I followed him on every social media known to man.

When I began writing Signs of Life, the physical description of my character, Kai, started to become Cory in my head. The eyes, the hair, the tattoo, the attitude…Cory was Kai. So when it came time for the cover art, I couldn’t stop thinking, what if? What if I could get Cory for my cover?

Nah, that will never happen. Andrew Christian will laugh you out of town.

I told myself that over and over, talking myself out of it, until I brought up the idea to my friend Kenya one day. She told me, “What do you have to lose? The worst that could happen is they would say ‘no’ or totally ignore you. So what? At least you’d know.”

So I screwed up my courage, emailed Drew LaQuang, Cory’s booking person, and asked if I could license a picture of Cory for the cover of my book, explaining that I was a huge fan of his. Within a few hours I had my answer: “Sure!”

Cue intense fangirling and celebration! (My friend Monica heard me screaming all the way from Brazil and messaged me to ask what was going on, LOL).

I contacted Paul Richmond, the art director at Dreamspinner, and asked about the steps I’d need to follow for licensing a picture. He was extremely helpful, sent over the legal forms I had to have, and made sure I was aware of the size requirements, pixels, etc., for cover art.

Unfortunately all the pictures I found on the Andrew Christian website were too low-res to be used, so I emailed Drew and asked if they had higher-resolution pics I could look at. He immediately and graciously opened their photo archives to me, and I was able to browse at my leisure.

When I found one that I liked and that my cover artist, Natasha Snow, could work with, I filled out the licensing form and emailed it to Drew, who had it back to me in a few hours. I forwarded it to Paul and boom, I had my cover model. I had my actual face cast for Kai on my cover!

The whole experience has been amazing. I can’t emphasize enough how awesome the Andrew Christian organization is. Nobody laughed at me, nobody said ‘No,’ nobody said ‘Figure it out.’ Every time I emailed with a question or a problem (the low-res pics), Drew wrote me back in a timely fashion and helped me resolve it.

For a huge, multimillion dollar company to do that for some strange woman who emailed them out of the blue, that says a lot about their customer service and their appreciation of their fans. Andrew Christian and Drew made everything easy and painless, and now I have a cover that’s personal, and beautiful, and means a lot to me.

So from now on my mantra is, and I encourage everyone to adopt it because you just never know…IT NEVER HURTS TO ASK!

And now… the cover!! 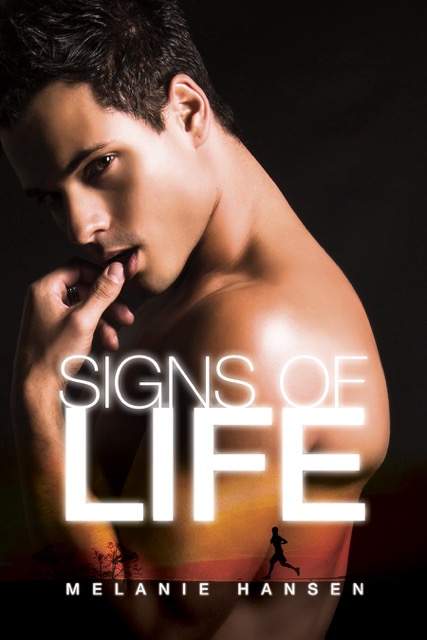 Jeremy almost flinched as the man’s eyes met his but somehow he managed not to. There was something vaguely familiar about him, which was why Jeremy had been watching him in the first place, but he was positive they’d never met. This man was unforgettable. When Jeremy had first walked into the club, so noisy and crowded, he’d almost turned around and left. It was a mad impulse that led him here in the first place, and it had been so long since Jeremy was impulsive that he felt shaken and out of his depth. That fact alone had stiffened his resolve to stay for at least a little while; then he’d gotten a glimpse of the beautiful, exotic man, and nothing could have convinced him to leave.

The first thing that struck Jeremy was how confident he seemed, how he held himself. Here was a man who knew who he was and was comfortable in his own skin. He was simply dressed in a tight black graphic T-shirt and jeans, but when he’d stood up from his stool to dig his wallet out of his back pocket to pay for his drink, Jeremy’s mouth watered as the jeans slid down to ride low on the man’s hips, showing a slice of muscled belly.

His shoulders were broad, his torso slim and compact yet rippling with muscle under the tight shirt. Long, lean legs were showcased by the soft, worn jeans, black boots completing the look. As Jeremy stood at the edges of the sheltering crowd and stared, he noticed the leather bracelets and silver rings the man sported on his wrists and hands, his eyes following the corded forearms up to a tattoo that was just visible on his right bicep, the lower edge of it peeking out of the sleeve of the shirt.

Jeremy edged closer, lust surging through him, his eyes drinking in thick black hair, carelessly styled, and a nose that had been broken before but did nothing to detract from the man’s startling good looks. As he tilted his head back to take a long swallow of his beer, Jeremy’s mouth watered at the arch of his throat, the muscles working as he swallowed, a pair of sinful lips wrapped around the tip of the bottle like Jeremy suddenly wanted them wrapped around the tip of his cock, drinking him down as Jeremy emptied his balls against the back of his throat….

Then the man’s eyes met his, the predatory heat in them making Jeremy’s knees weak. As the man licked his lips, Jeremy noticed with a jolt he was sporting a hoop through the lower one, emphasizing the plump fullness of it, and the simmering lust ramped up into raging hunger. Helplessly Jeremy moved closer, the man holding his gaze, the eyeliner he had lightly applied around his amazing golden eyes making him look even more exotic, dangerous.

Jeremy got as close as he could, the people massed around the bar making it difficult to get next to his target. The man looked Jeremy up and down leisurely, all the way to his feet and back up to his flushed and burning face; then he slowly spread his knees wide, making room for Jeremy between them. Jeremy moved in, feeling like he was strangling, his chest tight, the need to touch, kiss, lick and bite overwhelming him.

Jeremy swallowed, then nodded, all of his senses focused on the heat of the man’s body close to his, the way his legs looked splayed around Jeremy’s hips.

“Are you here with anyone?” he asked, annoyed at how abrupt his voice sounded. He wasn’t used to making small talk anymore, wasn’t used to the mating dance between strangers. It had been so easy with Brent: a backyard barbeque with friends, an introduction, mutual attraction and easy conversation leading to an invitation to dinner. They hadn’t spent more than a day or two apart after that.

The thought of Brent was like ice water on his ardor, and he could feel himself shutting down, wondering what the hell he was doing. Just as he was about to take a step back and leave, he felt the man settle his warm hands on his hips, stroking the skin between his shirt and the waistband of his jeans with a rough thumb.

“Just a friend,” the man said softly. Jeremy struggled to focus, remembering he’d just asked if he was here with anyone. The thumb caressing Jeremy’s sensitive skin was rough, callused, and it felt so good. It had been so long since he’d been touched….

Jeremy took a deep breath. He could do this… he wanted to do this. It was just fucking, just mutual pleasure with a willing stranger, a stranger he would never lay eyes on again. Purging his thoughts of anything except need, lust, he laid his hands high on the man’s splayed thighs, drawing circles with this thumbs along the inner seam of his jeans, flirting with his crotch but not quite touching.

“I want to fuck you,” Jeremy blurted, hating himself for his ineptness, his cheeks flushing hotter as the man’s amazing eyes filled with amusement.

“Yeah, I got that, amigo,” he said, tightening his grip on Jeremy’s hips to keep him from moving away. “And I want to let you.”

Melanie Hansen has spent time in Texas and Florida prisons…for work.   She’s been in a room with a 17-year-old mass murderer who was also one of the most soft-spoken and polite teenagers she’s ever met.  After a 13-year career as a court reporter, she can tell many stories both hilarious and heartbreaking.

She grew up with an Air Force dad, and ended up marrying a Navy man.  After living and working all over the country, she hopes to bring these rich and varied life experiences to her stories about people finding love amidst real-life struggles.

Melanie left the stressful world of the courtroom behind and now enjoys a rewarding career transcribing for a deaf student.  She currently lives in Arizona with her husband and two sons.

(All photos in this post used by permission from Andrew Christian, Inc.)