Thanks to everyone who’s bought their copy and for all the well-wishes, reviews, visits, and shares! You all rock. *hugs*

What’s happening today, Aug. 19: Dreamspinner Blog (in which i give away a copy of my entire backlist), Pride Promotions Book Blast (in which i will give away a $20 gift card~follow the link to a list of participating blogs), Renae Kaye’s blog (in which she gives the most fabulous interview evah!) 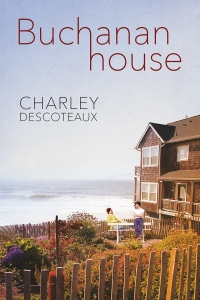 Eric Allen, thirty-three-year-old line cook, moved in with his grandmother, Jewell, after a disastrous coming-out when he was in middle school. She raised him, and he cared for her when she fell ill. When Jewell died she left everything to Eric—angering his parents and older brother. The inheritance isn’t much, but Eric and his bestie Nathan pool their money and buy an abandoned hotel on an isolated stretch of the Central Oregon Coast. The hotel isn’t far from Lincoln City—a town with its own Pride Festival and named for a president—so they christen it Buchanan House after James Buchanan, the “confirmed bachelor” president with the close male friend.

Eric and Nathan need a handyman to help them turn Buchanan House into the gay resort of their dreams. Eric finds Tim Tate in the local listings and over the months leading to opening weekend Tim reveals himself as a skilled carpenter with many hidden talents. Eric falls hard for Tim, but before he can see a future with the gorgeous handyman he has to get over twenty years of being bullied and shamed by his birth family. It would be much easier if Eric’s brother Zach weren’t trying to grab part of the inheritance or ruin opening weekend.