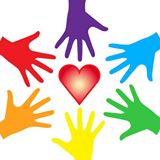 Please welcome fellow Harmony Ink Press author, Suki Fleet! She was kind enough to let me interview her, and to bring along an excerpt from her upcoming novella, Wild Summer.

Thanks for coming, Suki!

Tell us a little about yourself—what do you do when you’re not writing?

Thanks for having me Charley. 🙂 When I’m not writing I make and sell fabric, purses, handkerchiefs etc. online. My dad sold fabric for Liberty of London in the 1960’s and 70’s and fabric has always been a big part of my life. I love it almost as much as writing.

How much do you know about the story when you start to write a first draft?

Not much generally. For This is Not a Love Story I only knew I wanted to write about two boys struggling to survive on the streets, one looking after the other. For Wild Summer, all I knew was I wanted Crash to have a happy ending. Skeleton was based on the premise man falls in love with son’s classroom helper.

I’m horrible at titles—how do you choose yours?

Titles generally come to me before I write a story, and I have lots of titles in my head I’m desperate to use for stories. Sometimes a whole story comes just from a title.

Character names, however, I find really hard, unless the name jumps out at me (which doesn’t happen too often).

How much of your own life and personality do you put in your work?

It depends on the story. And I guess it depends on how a character’s personality resonates with my own as to how I use my own experience and reactions to situations.

In This is Not a Love Story there is a lot of me, I really lived Remee’s story (not in reality) but emotionally. Whereas with Skeleton, there’s not much of me at all apart from that story’s location. With Siren, I had real fun with those characters but their stories are very much their own. In Wild Summer, Crash reactions are how I’d like mine to be sometimes, and I enjoy exploring characterization in this way. Innocence, my next novel release, is probably similar to This is Not a Love Story in the way I lived the protagonist’s story.

What’s the most difficult subject you’ve ever researched for a book?

Researching asthma attacks for The Glass House was hard.

What are you working on now?

I’m at the thinking hard stage (not quite in full story mode) for Julian’s POV in a parallel story to This is Not a Love Story, which with either be titled The Ever and The More or Catch Me if I Fall.

A novella from the Love Story Universe

At fifteen, Christopher falls in love with a boy whose life he saves. But things go wrong and four years later, he wishes he’d acted differently. His conscience begins to haunt him, and he knows he must find Summer again.

At seventeen, Summer pushes away the boy who saved him. Four years later, he is stuck in an abusive, damaging relationship. When he sees Christopher again, it’s a sign he can’t go on living like he is, but he can’t begin to see a way out.

For either boy to stand a chance at happiness, they must find each other and obliterate the wrongs of their shared past.

With a spike of absolute panic, Christopher could see the accident about to happen, could see the boy’s fragile bones crushed beneath speeding wheels, his blood smeared on the tarmac. Without thinking, he just reacted, sprinting and launching himself at the boy, the momentum pushing them both across the road right in front of the truck. They skidded across the tarmac and for a blinding second, he thought he was too late—the scent of asphalt and car fumes filled his lungs, and he closed his eyes, the soft fabric of the boy’s clothes bunched in his fist, waiting for the impact and for everything to be over.

But it didn’t happen. For a moment nothing happened. Then Christopher opened his eyes and saw they’d made it to the other side of the road. The truck was gone in a whoosh of hazy air, cars zooming past as if nothing out of the ordinary had occurred, as if the two of them had not nearly lost their lives in an all too common traffic accident.

The boy pinned beneath him looked absolutely petrified.

His heart hammered wildly against Christopher’s own, like the wings of a bird beating desperately against the bones of its cage. It was as though he thought Christopher had grabbed him and sent both their bodies skidding across the hot gravel because he wanted to purposefully hurt him, not because he’d just saved his life pushing him out of the way of the truck about to mow him down.

For a moment Christopher couldn’t move, could only stare into the terrified boy’s eyes, thinking he’d never been this close to someone with such unusual, startlingly light-colored eyes—almost golden—and with his electric shock of blue hair and smooth caramel skin, Christopher felt as if he’d caught a fairy or some other magical creature who, on being captured, would perhaps screw his eyes shut and hold his breath and just… disappear, leaving Christopher holding a pile of dirty clothes.

The boy began to tremble visibly. Christopher realized he was probably crushing him with his weight and, moving slowly, he eased himself up and flopped down onto his back next to the boy. His shirt stuck to his chest and sides, and sweat trickled down his spine. He could smell the adrenaline as it seeped out of his system—mostly bitter, a little sweet. It was the same after a big jump, something that had you questioning what your life was worth and whether you’d miss it if you ended up splattered on the ground in the gap between the buildings you were trying to clear.

It hit him then how monumentally stupid what he had just done was, how narrowly the truck had missed the both of them. He brought his hand up to his temple and slowly let it all sink in. But how could he not have tried to save him when he had been the reason the boy had run into the road in the first place? If Christopher hadn’t given chase after he’d seen the boy take off with his bag, none of this would have happened. How could anyone just watch someone be run over if there was the tiniest chance they could save them?

He turned his head, fully expecting the boy to be a vanishing speck on the grassy hill behind them, retreating into the distant council estate where Christopher would never find him, but the boy still lay where he’d fallen, looking as shell-shocked as Christopher.

His soft lips were moving—it fascinated Christopher the way he continually touched his lip ring with the pink tip of his tongue—and there were words there, being spoken in the unsilent sphere of the world, but currently the angle was all wrong for Christopher to see what they were. He wasn’t sure he wanted to see right now anyway. For all he knew, they might be along the lines of fuck off.

Instead he sat up. They had ended up only a couple of meters from the road, and cars were speeding past a little close for comfort. He could see his holdall still sat between the barriers on the other side of the dual carriageway, where the boy had dropped it before he’d jogged backward into the path of the truck.

Slim fingers gripped his sleeve. He turned. The boy’s expression was still shocked but curious too.

Christopher read the shapes of the words on his lips. “Are you deaf?”

Caught again by those arresting eyes, Christopher nodded and waited to see what the boy’s reaction would be. There were three ways people generally reacted to his deafness—they either made some rubbish excuse to avoid talking to him, which he hated; they were nice and tried to have a semi-normal conversation, which he valiantly tried to overcome his inherent shyness for; or they were overly curious, questioning him to within an inch of his life, as though he had some fascinating tropical disease, which was one of the few things that made him fantasize what it would be like to punch someone.

The boy didn’t seem fazed at all. “Are you hurt?” he asked, lips moving slowly, concern obvious in his expression.

Christopher shook his head, looking away. He should be angry. This boy had swiped his bag, after all, and in it was the sum total of everything he now possessed. But perhaps near-death experiences wiped away insignificancies like possessions.

“What’s your name?” Christopher asked, his courage mostly fueled by the dregs of adrenaline still coursing through his bloodstream, though he felt the familiar heat rising to his cheeks all the same. He could blush for England, and he knew he sounded slow and stupid when he spoke—he’d been told too many times for that hang-up to ever truly go away—and normally he was particularly shy about speaking aloud around people he was this attracted to, but he had a sudden need to know the boy’s name.

Suki Fleet currently lives in the heart of England. Her childhood was quite unconventional and she spent some time living on a boat and travelling at sea with her family. Since she was very small she has always dreamed of writing for a living, but though she has written original fiction online for years and encouraged many new writers to keep going and follow their author dreams, it is only recently she got the courage to make her own dream a reality and actually send something off to a publisher.

By day she runs her own business selling fabric (her second love) and juggling family commitments, by night she weaves the stories that the characters in her head dictate. These stories often start with pain or longing but always end with love.