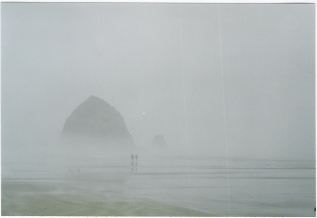 The working title is Sea Change, and it was drafted about a half-mile from where this picture was taken.  This picture is a few years older than the story, but my view was pretty much the same!  I’ve already posted two snippets on Six Sentence Sunday and was about to repeat one of them when I realized my superstition about posting non-contracted work seems to be baseless.  Maybe I’m a little like Neil and posted them behind my own back because it’s actually lucky?

If you think you’ve read this before it’s not because your ESP is working overtime, the beginning is familiar (and I’d still advise squinting a bit as you read because it’s unedited) but this time it doesn’t stop with a tease of muscular stomach . . .

[After lunch in a little tourist-trap diner/tavern on the Oregon coast.]

They each had two balls left on the table and Ty asked if Neil wanted to make it more interesting.

Neil laughed.  “Not sure I can handle more interesting.  But what do you have in mind?”

Ty bent over to line up his shot and his tank top draped over the table, giving Neil a prime view of  tanned chest and a tease of muscular stomach. Ty missed an easy bank shot.

“Or I can get it after I win.”  Neil sunk the two-ball in the side, and then bumped a stripe in for Ty along with the six.  As he lined up the eight-ball Neil realized what he’d done.  He’d just asked this young guy out to dinner.  He’d never asked anyone out before, not once, and this seemed as though he’d done it behind his own back.  His hands shook enough to ensure the cue ball followed the eight straight into the pocket.

Ty laughed.  His laugh made Neil grin even through the burning blush he was sure encompassed his entire face, neck and most of his chest.

“I warned you I wasn’t very good.”

Ty shook his head.  “You weren’t kidding.”  He replaced his cue in the rack and maybe he was a little pale when he turned back around.  “You don’t have to—”

Ty’s grin returned that fast, forcing Neil to wonder again about his age.  When he grinned like that he looked almost as old as Neil himself, who wasn’t quite ready to admit he was pushing forty.  But when he’d turned away from the cue rack he’d seemed barely old enough to be in the bar.  Ty’s grin stretched and Neil realized he’d been staring.

“You’re buying, so you decide.”

Okay that was mean, I admit it, but you’ll have to wait and see what happens next.   In the meantime, click on the banner and head on over to Facebook to see who’s posting this week!

24 thoughts on “A celebratory Saturday Seduction!”