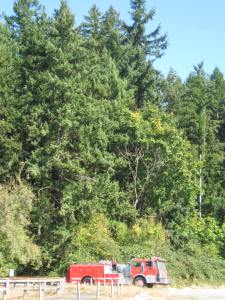 Today as I left class I saw this old, and most likely long-retired, fire truck sitting in a field on the edge of campus and even though I was thinking about homework and errands, one of my characters popped up and really wanted to go check it out.  So, since I love my guys, I let him.

Sam White is one of the main characters in my Christmas story, “Comfort and Joy”, that’s forthcoming from Etopia Press.  I’ve known him and his family for a long time (in fact, my first two published short stories were about his mom).  Sam’s a professional musician but if he didn’t have music he’d want to fight fires and rescue folks from burning buildings.  Over the years I’ve written a few of his stories so I know he calls himself a mutt even though he doesn’t look like one.  He’s a mix ancestry-wise:  French Canadian, Mohawk, German and Dutch on his dad’s side and Irish and Swedish on his mom’s, but he has his dad’s brown skin and shiny black hair.

I’m always curious about the lesser-known meanings of commonly-used words, and the etymology of everything, so I looked up “mutt” and found something I didn’t already know:  it’s short for muttonhead.

2.  a stupid or foolish person; simpleton.

I seriously doubt Sam would use the word to describe himself if he knew this!  As he once told his mom, he’s never been accused of placing too low a value on himself.   A mongrel is one thing but foolish (even if sometimes it’s all too applicable) just wouldn’t fly.

Uh-oh, now I hear Charlie snickering in my head.